I’m divorced now. Never thought it would happen, but who does? Sadly, this is how half of marriages end. The other half end in death. I think we came out ahead in the end. My ex-wife and I are both still above ground and able to convert oxygen into carbon dioxide. How’s that for a glass half-full?

When I was a lad, I played youth soccer. It was the only sport I really excelled at, and that is saying something. Atypical of my usual demeanor, I was a rough player. On rare occasions I would take a ball to the gut or a more personal region of my body and every coach I ever had told me the same thing: “Play through the pain.” So, while I adjust to this new status of mine as a divorced man in the 21st century, I shall endeavor to do as my coaches instructed and “play through the pain.”

Yes, I worry a little bit about the stigma of being 40-plus and divorced. I’m just one flashy sportscar and erectile dysfunction prescription away from being a cliché. But, I don’t fret too much about it because it turns out I’m in good company.

While living in Quahog, Rhode Island, this guy’s marriage to Loretta Brown ended when friend Glen Quagmire ga-googitied Loretta’s ga-flavity with his ga-schmoygen. I had a chance recently to talk to Cleveland about the experience and the resulting separation and he had nothing but comforting words for me. “Divorce…it’s not so turrible.”

Not turrible, indeed. Thank you, Cleveland.

Set the Waback Machine to the swinging sixties. I don’t know much about this guy (I don’t watch his show), but the chicks seem to dig him, and he works in a very liberal office environment where they get to drink booze and smoke indoors. I understand he’s recently divorced, but look at him. He certainly seems to be taking it in stride. I wonder who his tailor is.

From the swinging 1960s to the astro-psychedelic 2260s, this guy’s easygoing bedside manner still wasn’t enough to hold his marriage together. Seriously. Long before J.J. Abrams made it part of Star Trek canon (which is probably the only positive contribution to Star Trek canon that we can say he made), Bones was destined for divorce court. An early draft of one episode of the classic series had his daughter visiting the Enterprise, along with direct references to his failed marriage. So, that’s a divorced doctor, a gay helmsman, a Russian navigator, a black communications officer. Just add a bartender and you’ve got the makings of a mediocre “guy walks into a bar” joke. Or add Ralph Furley, and you’ve got yourself a 1980s sitcom. 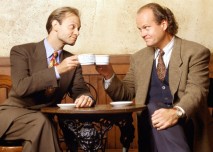 Yes, it’s the Crane boys! They are the living reminder that no matter how charmingly erudite you are, how fabulous your Seattle apartment is, and how learned you are at psychiatry and the intricacy of human emotion, you can still struggle with matters of the heart. Repeatedly.

It bears noting that Frasier was once married to Dr. Lilith Sternin, and I cannot understand why he left her. The woman has legs for days, plus she knows a whoopee spot where the gin is cold and the piano’s hot.

Or maybe you know him as Dr. Rosenpenis, Mister Poon, or John Cocteausten. The FCC really pisses me off because whenever you watch “Fletch” on basic cable, they always bleep out the syllable “Coc” in Cocteausten. But, I digress. I could never hope to attain Fletch excellence. Whether he’s entertaining on the lanai, playing fantasy league pro basketball with the Lakers, or getting an unnecessary prostate exam for the sake of investigative journalism (one bullet I’m quite proud to say that I never had to take during my time in the profession), he always stays one step ahead of his boss and the cops.

Incidentally, the computer I wrote this blog entry on was purchased with Mr. Underhill’s American Express card. Want the number?

Echoes of past screamings